Warberry C of E Academy, which is part of the Learning Academy Partnership, welcomed champion athletes Rich Parker and David Hill to tell the children all about their inspirational stories.

Rich Parker is the UK number one half-pipe inline skater as well as the European Champion and has previously been awarded silver in 2011 at the X-Games. David Hill is a Paralympian swimmer and triathlete with a very successful record of silver and bronze medal wins.

The children were delighted to see David Hill again as he visited the academy in the last academic year along with various other academies in the Learning Academy Partnership.

The two athletes hosted fantastic and informative sessions with each of the classes. During the sessions, Rich Parker spoke about how he found his love of inline skating later in childhood having previously not been particularly interested in the sport. The children were utterly inspired and loved finding out about what his sport entailed and seeing the inline skates that he had won his awards in.

The second part of the session involved a fun fitness circuit which staff and children loved participating in. Rich Parker and David Hill showed the children how to complete the different exercises and then went around, as everyone exercised in the glorious sunshine, offering the children words of encouragement.

It was such a wonderful visit which inspired the children by highlighting the importance of perseverance and trying out a variety of things as they never know what talent and passion they might discover.

Karen Southard, Head Teacher at Warberry C of E Academy, said: “It was lovely to have Rich visit our academy and to welcome back David. Through their unique and inspiring stories, they taught our children about the importance of trying out new things and that they can truly achieve anything they put their minds to.” 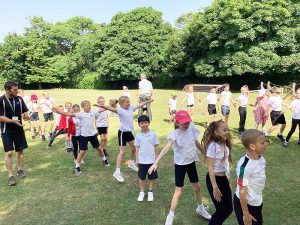 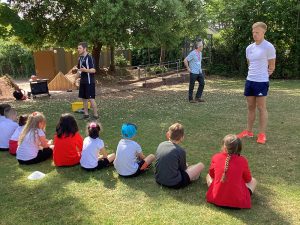 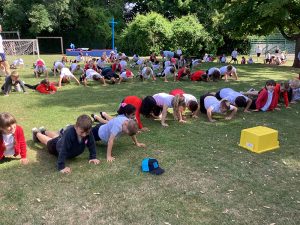